Two things are certain: (1) It’s Friday! and (2) Today’s subject is finally ready for some spring and summer roadtrips! It’s me, Stephanie, writing again for the blog. After spending a couple of days at the Reggie’s Motorworks Spa, it has been kept under our roof due to this rainy spell we’ve endured. According to tomorrow’s forecast, it should be safe to deliver it to its owner, Sean. Finally! As you’ve witnessed over the past several weeks, Sean’s cabrio has come such a long way since we first met her. It’s time for a trip down memory lane…sit back, relax, and read on…

If you would like a little review first, that’s fine, take a look here, here, here, here, and here, then come back to this post for the grand finale.
Long, long ago, Reggie’s first shop was in Lawrence, Indiana, in a pole barn occupied by various heating and air conditioning equipment and supplies, a few limousines, and other stuff that the owner had accumulated over the years. Reggie knew the owner through his previous career in the cellular industry. Another friend of Reggie knew he worked on ol’ BMW’s and gave him a call: a white convertible was on its way to the crusher, did he want to look at it? Reggie had another good friend, Sean, whom he thought might be interested in this car, even though it would need a little work. Ahem, make that a lot of work. Sean said “Yeah, that would be cool.” So a deal was made that sealed the fate of this hunk of metal, destined to be just that…only crushed to tiny bits and pieces of metal. Plus, the car only had roughly 86,000 miles on the odometer. The car was towed to Reggie’s shop. I remember looking at it thinking this was going to be quite a project. An expensive project at that! I mean, the seats and dash were covered in dirt, dust, and grime, just crumbling away. Trash and debris was strewn about the interior. The top was shredded. As for the paint, I could barely tell the car was supposed to be white. Then Reggie cleaned and buffed just a small section of the hood. Wow! There actually was a nice, clean car hidden underneath! Sean saw its potential too, more so than I did, thank goodness, and he was excited to add this car to his collection. Unfortunately, we don’t have any photos in our archives of the car when she was unloaded from the tow truck. The ones we do have were taken once it was cleaned up a bit. The white pole barn in the background is where this all began. You’ll notice too that the hood was bent – until Reggie fixed it! 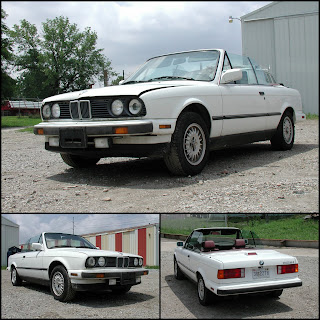 The cabrio became driveable and somewhat presentable. Sean knew that one day he would want to get the interior back in shape, and take care of a few other odds and ends on the car. A couple years went by, and the cabrio was ok, but just not satisfactory. Not even close. Once winter hit, Sean brought his car back to the shop for her makeover. The carpets have been professionally cleaned, check! The seats have been treated with Leatherique’s Rejuvenator Oil and Pristine Clean, check! The driver’s seat was reconstructed from a white leather seat, re-dyed with Leatherique’s Cardinal Red dye, check! And, the seat heater was reinstalled, check! The passenger seat was reconstructed as well from a donor seat with better leather and foam, check! The rust on the driver’s side rear quarter panel was removed, repainted, renewed, check! The air-conditioning system has been updated and fully recharged, ready to battle the summer heat, check! The rust in the battery tray and under the grille was remedied and repainted, check! And, of course, this cabrio was treated to some pampering, a la Reggie’s Motorworks Spa, check!
So after almost being hauled off for scrap, after all the poking, prodding, welding, cutting, grinding, painting, and cleaning, this cabrio is a true survivor! She’s ready to shine, and will no doubt turn some heads on the road very soon, especially with her Euro smilies. Right now, she’s got about 93,000 miles clocked, and we’re sure she’s bound for many, many more. We thought it would be very fitting and fun to get some proper photos of this pretty cabriolet…finally! Without further adieu…I am happy to present this 1988 BMW 325i in all her Alpine weiss glory! 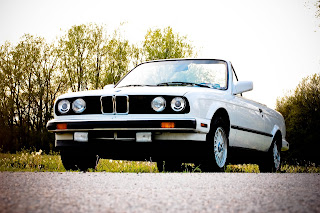 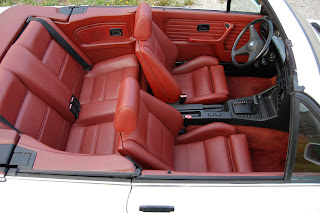 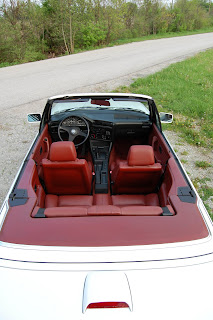 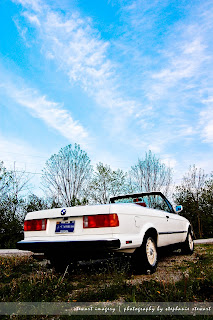 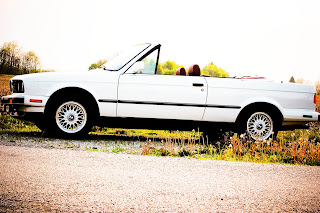 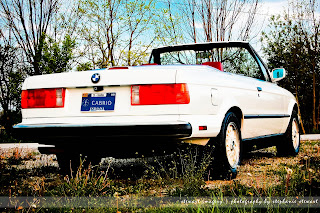 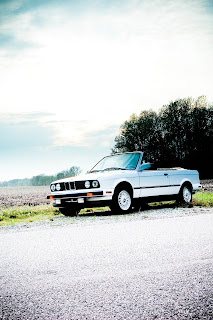 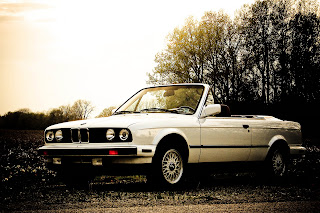 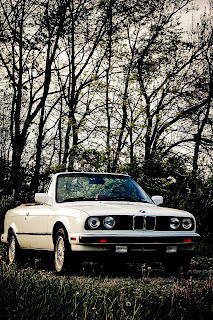 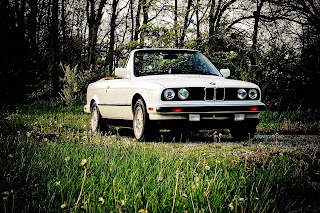 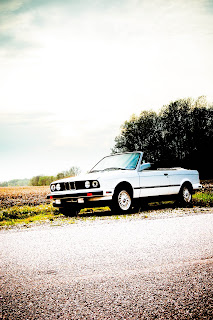 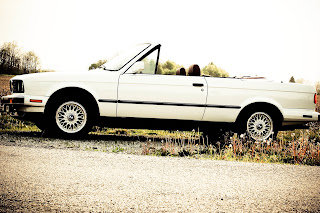 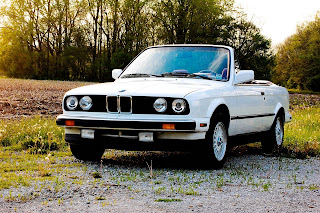 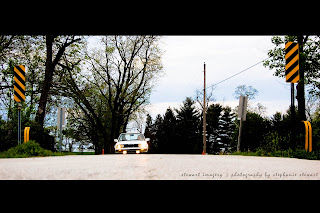 We’re very excited to get the keys to this great car back in her driver’s hands. Sean has seen the car’s progress, but seeing it totally done and ready to hit the pavement will be the icing on the cake. I’m thinking he may have to fight his wife and daughter to drive it first! Well, ok, his wife Kristen is allowed to drive, but Mason will have to wait 16 more years! Be sure to check it out at our Open House on Saturday, June 20th!